Those of you old enough will recognise the title of this blog from a song I used to love when I was young. Apparently the leg bone is connected to the thigh bone, the thigh bone’s connected to the hip bone….now hear the word of the Lord. Well mine are well and truly connected now, with metal hip replacement number two. All staples out now and the wound is healing brilliantly. I am frustrated at being unable to drive, walk the girls, garden (bending and twisting are off limits ) or of course ride my lovely girl Issie.  I keep telling myself this is short term and I will soon be firing on all cylinders, yeh !

Being the character that I am, I was determined to get to Crufts after being called in for my op a week early. I had been home 2 days but there was no stopping me.

How I wish I was sensible (well sometimes!). I shouldn’t have gone, I felt nauseous all day and by the time I got home I was exhausted.

The one thing I did enjoy without feeling guilty was the Crufts TV coverage followed by the excellent ITV coverage of the Cheltenham Festival.

I  must mention a lady that had a puppy off me, I think 5 years ago now, called Jakki Slamin. She has been competing her Munster Lottie in Agility and had succeeded in qualifying for Crufts ABC finals. I am so impressed I had planned on going to watch but it was not to be.

Lottie and Jakki ought to be so proud of their relationship, agility is not easy as I well know. It is such a wonderful sport to participate in with your dog even at the level I promote with my clients, we have so much fun but Crufts finals, what an achievement. Well done Jakki and Crumpsbrook Sommer Eiche. So proud. Here’s to next year and I will get there to support !

I  have been planning a litter from Molly my youngest Munsterlander for a while now. I had come round to the idea of using a European stud dog and had done hours of research and made a few tentative initial contacts. My research also looked at AI matings having had such a success with Kite and Dougie’s last litter.

I really weighed up the plans that I had for this year including my hip replacement and our National Garden Scheme open day (July 7th , please support  if you can). I also consulted DEFRA concerning travelling Molly to Europe later this Summer and asked if Brexit could complicate the situation.

Katie was happy to accompany me for a reconnoitre of my shortlist and together with Jan (Otto’s mum ) who has A level German,  I was planning an adventure.

There was one other plan which I had bubbling away, which was using a dog in this country who’s father was a top graded German stud dog.

I had approached the owner and was waiting for their decision.

I am delighted to say shortly after Crufts and several conversations later Molly, Crumpsbrook Molinia and Rosko, Quilesta So Treasured will have a liaison this Summer!

I am so excited, Chris (a little excited !) and I will be keeping one of this litter, fingers crossed.

Therefore I can shelve my road-trip for now and let Brexit take its course. Thank you Jan, Rosko’s owner.

Puppy plans will be updated in due course. Interest in this litter is already growing I have a list in place but please contact me for more information if you are interested in what should be a gorgeous litter. 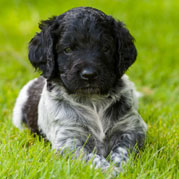